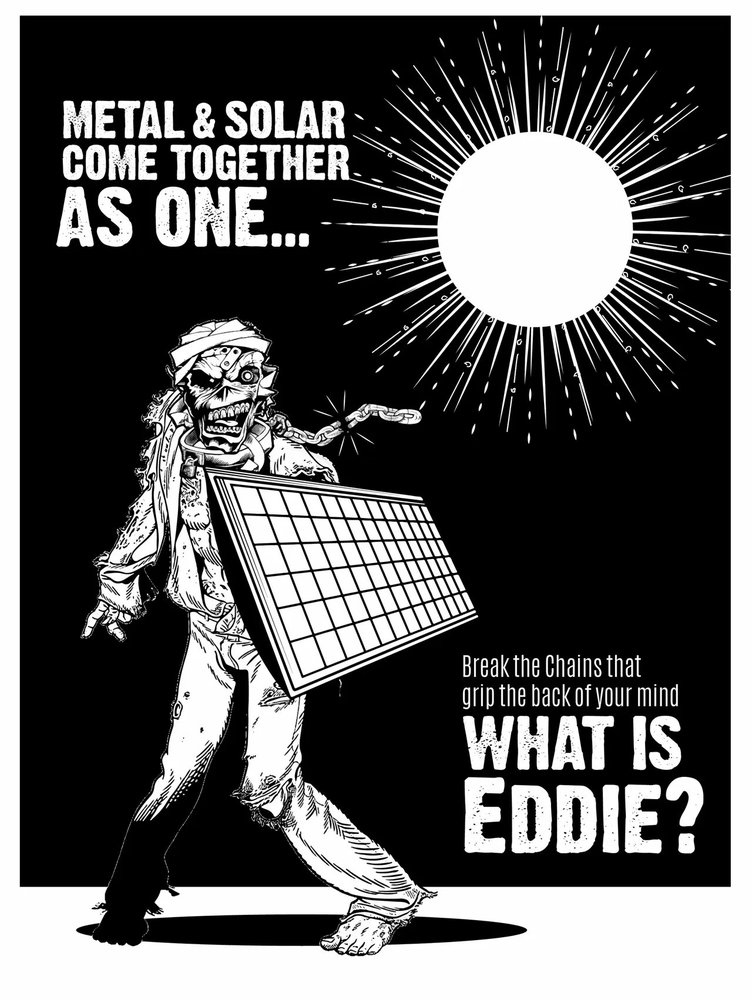 The Bay Area of Northern California is a proven destination for generations of trailblazers and pioneers. This has always been a magical home for great vibrations. 150 years ago, ancestors were chasing gold in them thar’ hills. Then, we traveled into other places further west. True pioneers arrived as far west as west could be defined. It was perceived by many that we had traveled to the edge of the world. We kept finding places further west.  “And Then There Were None”… at least not without a boat. Over the last half century it has become a starting point for modern time, forward thinking, difference makers!  The Bay Area of California is proven to be a place where community happens and idealists unite.

The young Bay Area Metalheads from 30-40 years ago proved a lot to us as an historic movement. The heavy metal music movement harvested, here in the bay area, has proven to change the world. When you consider watching “Murder In The Front Row”, the name of the documentary may seem scary to untrained ears and cautious eyes. Reality is a great story for the Bay Area Headbangers. Simply a great story.  Groups of young men coming together in effort to support each other to win. Camaraderie and willingness to move forward organically, with great intention, has always been consistent in the Bay Area. Energetically, the Bay Area has always been an amplifier. Ask anyone. Most recent half-century Bay Area success stories with a nationwide, but probably worldwide, recognition include:

* Tech center of the world drawing  families from all over planet earth. Internet starts here.

Buh Bye Electric Landlord. Sunpower is known as the ultimate Peace of mind. Heavy metal, “Piece Of Mind” and “Outlet for Angst”! It is all coming together… Metal and Solar in Dublin, CA

The kids in this storyline overcame a national music scene ruled by corporate radio commercialism. Their kind was not welcomed to the mainstream. These Bay Area Headbangers were passionate and held conviction. This was a belief that love conquers all!… Define the word love as caring, passion and commitment… that is good, right? Let us choose who with we will be united… Let us embrace our individual mind’s state of community. Love is family 1st… Community is where it starts. This is what the Bay Area headbangers’ movement taught us. They moved away from what was socially acceptable and predictable. They taught us that love conquers all! They taught us that independence is good…

HOW DOES METAL AND SOLAR COME TOGETHER AS ONE?

In my life experience, I am passionate about both. Metalheads and solar fanatics exist on very familiar passionate common grounds. Before I went solar, 6 years ago, I had a job in cable. I would visit homes. When I saw solar, I would ask “How do you like your solar”? Everyone I ever asked about solar responded with a fanatic… “It’s awesome” or something along those lines. The only thing I could compare is asking the guy with the POSSESSED shirt… “How do you like the album”?… (expletive) YEAH! It F’n RULES! 35 years later, my range of emotions are still dynamic.Relatively, as a 50+er, I’m as proud of telling families about my rooftop solar as I was to wear my CRUMBSUCKERS or GRAVEDIGGER T-shirts to concerts in the late 80’s.

The same pure hatred that true thrashers had for commercial rock bands such as CINDERELLA or POISON with their make up and poppy sounds is the similar disdain that solar adopters have harbored for the corporate Public Utilities pumping out dirty power, while consistently raising rates for corporate gain.

Longevity of The educated consumer always knew, “You get what you pay for”. The best solar analogy for the real metal/poseur comparison would be cheap equipment from China. It would be comparable to those cheap knock-off, 3 for $1 cassette tapes. They were less expensive and you got what you paid for. While the Maxell tapes, for $2 or $3 each, provided a far greater value because the tape didn’t get eaten up after 3 or 4 plays. Same as the cheaper solar equipment or installers. You may need to replace your panels 3 or 4 times and and have to fix a roof leak or 2. You could also avoid the headaches and just do it right the 1st time with vetted Sunpower install.

Sure… 80’s radio bands were popular. Radio stations would force feed the same songs over and over into your ears until you gain an opinion on a song. Eventually, you either loved it or hated it. Most radio music was middle of the road, easy on the ears. Most never approached Metallica status or shelf life of bands like Death Angel, Exodus and Testament who certainly are proven timeless… Others sell the flash in the pan or they have copied the backside electric connections after specific SunPower patents expired. The thing is, it’s over 1,000 patents, not just one. No others have proven to offer the substance the SUNPOWER has over decades. Public awareness of brands like LG and Panasonic are the mainstream. These brands earned a great name with refrigerators, TVs, toasters stereo equipment, etc… This does not mean their solar panels are comparable to the substance of the Bay Area’s SunPower panels. A 20-40 year product is well worth the education. Just as I am proud of my musical heritage, I have a certain peace of mind knowing I have the scientifically proven ultimate solar equipment on my roof. There is many reasons why landmarks such as the Apple Campus, Levi’s Stadium and the Angst residence are all about SunPower.

Yeah… Alotta people did not understand it. They were scared about Metal movement… “What is this devil music”?

Playing music from the heart, rather than playing commercial sounds that might get radio play, took some bravery. In solar, Sunpower is from the heart with a purpose. As the heavy metal movement was unique, so are Sunpower solar panels. It is fundamentally different. It is scientifically a step beyond. Substance is real… not trying to be like everyone else, but rather setting the standard.

* Something special to US

Just like the families who came together to start the tech movement and families whose ancestors traveled here following dreams of finding gold, musicians’ families were told their musical ideas were noise. Now, this same music can be heard over the loudspeakers at national sporting events.

Just like we thank these pioneers for breaking through musically and technologically, it may be our children, and/or our children’s children, thanking us later. We need to come together with like-minded thinking. Cleaner air with livable temperatures may be the dream that our descendants thank us for in the future.

The Declaration Of Independence was signed when 1.5 million people were identified as citizens of The United States Of America. How did we get here? “UNITED” is one word. “States of America” can be interpreted in many ways. States can be referred to as mental or physical. We became a movement to go west. Go west. Go west. Here we are now, 38 million people officially residing in California.This was confirmed prior to the delayed, and arguably obscured, recent census. America was just a misinterpreted name from ancestors exploring as far as west could possibly seem to become. This was until all of the great Pacific Ocean was deemed the edge of the American World. California is generally regarded as the last state one may experience within our the American world, This is, unless, of course, it might be Oregon, Washington or Alaska… maybe… Hawaii?… Yes, let us find a NEW WAY! It is our generations moving as far west as west is so far understood to be…

Dirty power is no longer necessary

I’m all good with getting dirty, I just don’t want my kids to have to breathe it in. I am hopeful that we have not been so careless that temperatures become unlivable. We won’t know until it is too late. I also prefer to pay way less for my electricity than what the general public has been hypnotized into. For some reason, lack of facts, research and/or momentum have provided rationalization or lack of urgency for many to still continue paying way more than necessary to the public utilities. Fortunately, the movement is on.

Monocrystalline solar panels are produced from one large silicon block and are produced in silicon wafer formats. … Mono-crystalline silicon cells are more efficient than polycrystalline or amorphous solar cells., also called silicon dioxide, compound of the two most abundant elements in Earth’s crust, silicon and oxygen, SiO2. The mass of Earth’s crust is 59 percent silica, the main constituent of more than 95 percent of the known rocks (Wikipedia)…

* Monocrystalline solar cells are more efficient because they are cut from a single source of silicon.

What?!… We can combine our earth with the sun and we get fed energy?… and it costs less than relying on corporations to rent us the same amount of energy? There are things we can control and things we cannot control. With music, I always found my way to the front row. With solar, I am committed on behalf of my family. We have taken control of our future energy expenses. Yes. We have Sunpower on our roof. It is the only Cradle To Cradle solar company.

Solar panels are made of metal. San Jose, with 141 MW installed and 139 watts per capita as well as Sacramento and San Francisco are included in the top 20 cities with solar per capita in the United States. 6 of the top 20 are California cities. Is it any coincidence? These are descendants of the same adventurous families who said go west. Go west. Go west.

The Bay Area Headbangers proved that they did not need to rely on the standard radio channels to bring their unique music public. These musicians took control and made a scene. The movement started right here.

There is another TAKE CONTROL movement happening strong in the Bay Area… For the last century, we have relied on an electricity landlord and most families have paid an exorbitant amount. This landlord would be most similar to the corporate radio stations and their documented payola. Over the last decade, local public utilities are imposing 5 rate increases yearly. Now that we proved solar works better both financially and ecologically, here. It is solar in the Bay Area, more and more families are moving to this renewable form of energy straight from the sun. This is now allowing families to lead by example and take control of what is still for many, an uncontrollable variable. Let us celebrate with the salt of the earth…Movement 2020…

Watch the preview for Murder In The Front Row and understand pride and passion of a movement.

The kids from this video are all grown up with families. These are families who understand what loyalty and coming together for a common cause really means.

It is a simple choice to do something that feels good and benefits others.

Moral to the story: