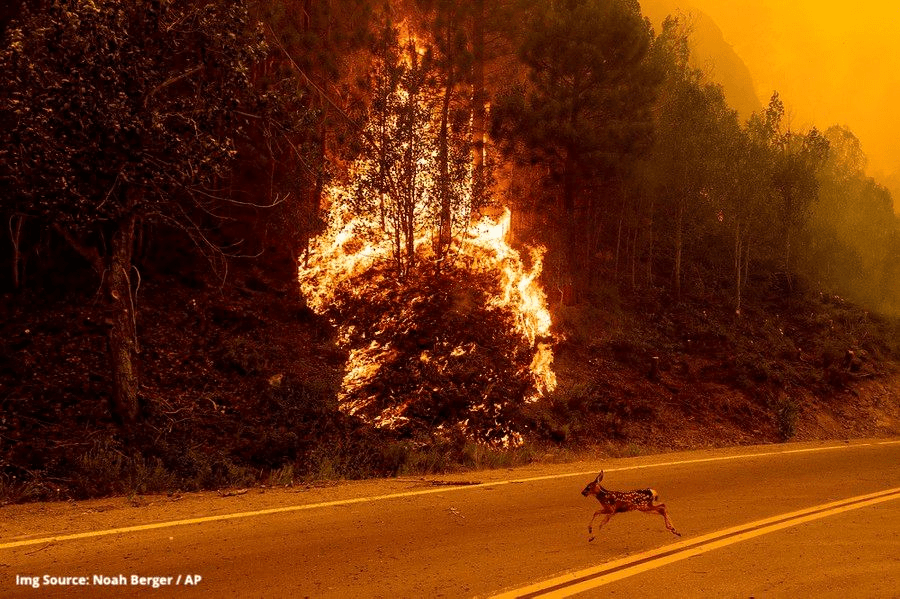 How is Climate Change Central to California’s Wildfires?

Scientists have long warned us of the dangers of climate change. Today, we are seeing their years of research and models come to life, and it worrisome. It is not only California that is experiencing historic drought and extreme wildfire, but its neighboring states like Oregon, Washington, and Colorado as well.

The question now arises, how does climate change play a role in this catastrophe? We will answer this by question by looking at these three components of fire: necessary weather conditions + plenty of burnable fuel + a spark.

Although climate change cannot take full responsibility for these wildfires, it is undoubtedly a powerful catalyst. As the U.S. West warms, the frequency and severity of heatwaves and droughts have increased. Since the start of the Industrial Revolution in the late 1800s, humans were burning massive quantities of fossil fuels, releasing carbon dioxide that trapped excess heat in the atmosphere. The burning of fossil fuels contributed to the global average temperature ticking up to roughly 1.8 degrees Fahrenheit. National Oceanic and Atmospheric Administration (NOAA) reported that the temperature in California had increased closer to 3 degrees Fahrenheit (1.1 degrees Celsius) and is likely to accelerate even further in the future. As a result of increasing global temperature, lower precipitation and warmer air temperature dry the forests and other vegetation – creating the perfect fire conditions. More so, adding strong winds and decades of fire suppression into the mix make a dangerous recipe for wildfires[2].

Winter snowpacks are also melting earlier than usual, which means that the forests are drier for more extended periods. Shifting meteorological patterns that drive the rain away from wildfire-prone regions does not help this catastrophe.

Droughts are creating dead fuel. And fire is both fuel and flammability limited. However, we have to consider the limits. Natasha Stavros, an engineer at NASA’s Jet Propulsion Laboratory, gave a good explanation for this phenomenon: “While the State of Washington has a lot of trees, it also tends to be really wet and cold there, so fires are limited by the flammability of fuels. On the other hand, Nevada has a limited amount of fuel, but it tends to be really dry in the area.” [3] In short, drought increases fires in flammability-limited areas but does not have an impact in fuel-limited areas. Ironically, there needs to be rain to have fire.

The leading natural cause of wildfires is lightning strikes. For example, even an unusual and dramatic lightning swarm that hit the Bay Area in August of 2019 can spawn a big fire. Because of climate change, we are now experiencing an increased number of lighting strikes generated by warmer temperatures that cause the atmosphere to create more convective systems like thunderstorms. It is also worth mentioning that human-caused ignitions are destructive. For example, the smoke from a gender reveal party caused a major blaze near Los Angeles in September 2020. Human-sparked blaze also includes improperly discarded cigarettes to sparking power lines.

The tricky thing about wildfires now is that there isn’t a thing that causes them- it is the multiple pieces fitting together: climate change, forest management, and human behavior. Now, the question is, what’s an individual to do? Schedule a complimentary consultation with one of our consultants.